The 10 Most Irish Cities in America

Everyone is Irish on Saint Patrick’s Day, the one day of the year when the leprechaun hats and lime-green jello shots seem not only socially acceptable, but (almost) cool. Now that this magical day is upon us again, we thought we’d check out where the green beer will be flowing and native partying will be the hardest: the Irish epicenters of the U.S.

Nationally, about 32.7 million Americans, or 10.2%, claimed Irish ancestry in 2015, according to the U.S. Census Bureau. We ranked the 300 largest U.S. cities by the percentage of Irish-Americans living there.

So where are you most likely to have some of the famed luck of the Irish rub off on you? 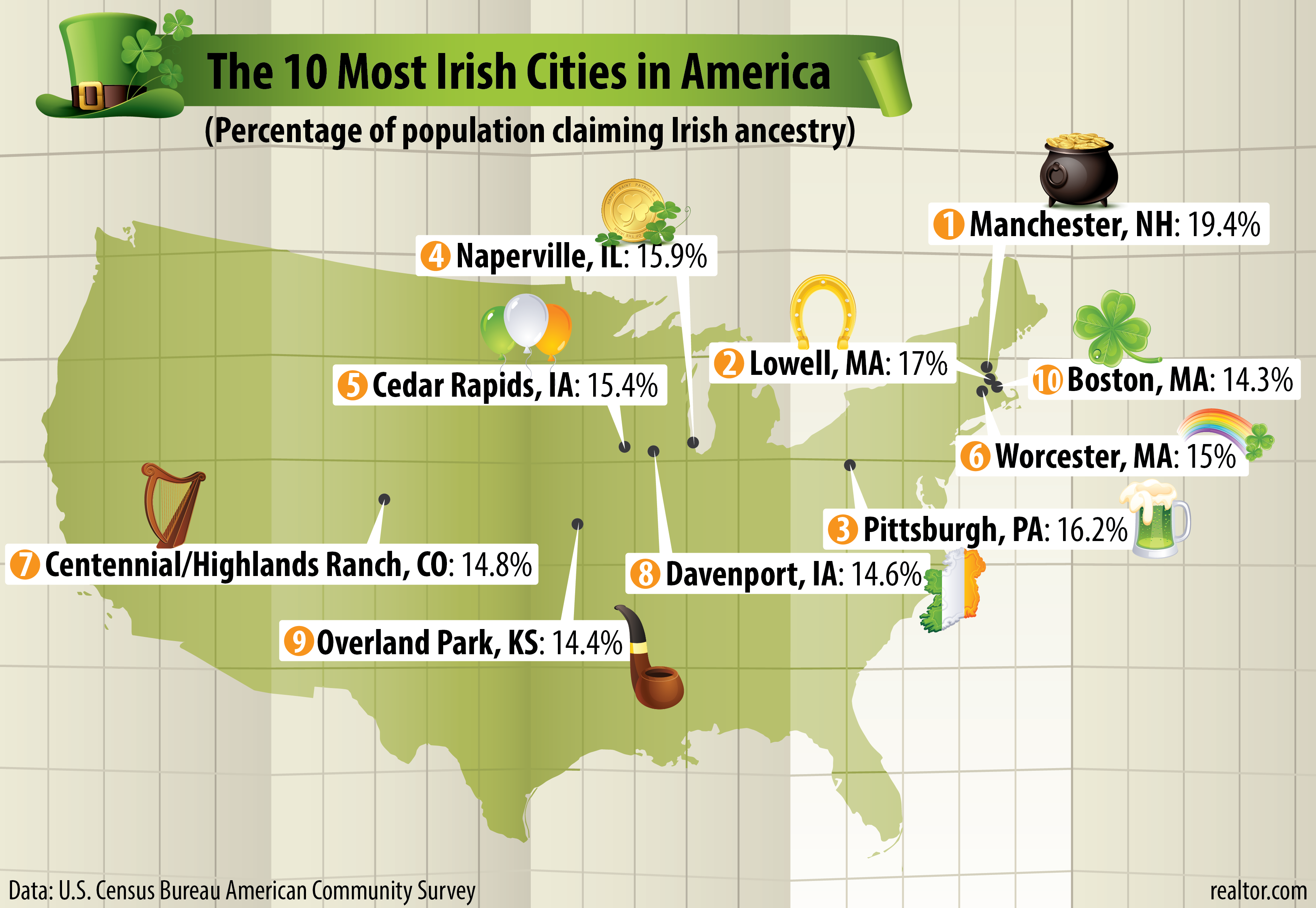 New England reigns supreme with the most Irish descendants in the nation. And the city of Manchester, NH, leads the pack, as nearly one in five of the people living there claims Irish roots.

That’s because Irish immigrants began to settle en masse in the New England region in the 18th century. Immigration then surged further in the 1840s and 1850s due to the Irish potato famine, as thousands fled their impoverished homeland for America, where they tended to settle in or close to the port cities where they arrived.

“It was kind of like turning on a faucet,” says Jay Dolan, author of “The Irish Americans: A History.” “Once the migration started, then their friends, relatives, and others began to gravitate” there as well, he says.

Indeed, the time-honored tradition of the Saint Patrick’s Day Parade began in Boston. The first meeting of Irishmen to honor Saint Patrick—it wasn’t a parade or official holiday yet—took place in the city back in 1737. A group of elite Irish men (yes, all men) came together to celebrate over dinner what they referred to as “the Irish saint.”

But the city nabbed only the 10th spot on our list as many Irish immigrants, like so many other Americans, left the city after World War II and headed for the suburbs to raise their families, says Dolan.

Only 14.3% of Bostonians identify as Irish today, fewer than the nearby cities of Lowell (No. 2) and Worcester (No. 6).

Irish in the Midwest

Irish immigrants aren’t just concentrated along the East Coast, though. Plenty moved to the Midwest in the 1800s to work in the mines.

For example, the Windy City tradition of dumping 45 pounds of green vegetable dye into the Chicago River, to turn it the color of shamrocks, has become an internationally recognized Saint Patrick’s Day tradition. After the main parade, many flock to the Irish American Heritage Center for a 12-hour bacchanal of Gaelic music, dance, and culture.

While Chicago fails to make the top 10 list with just 7.5% Irish-Americans, its suburb of Naperville posts the fourth-highest concentration, at 15.9%.

A bit farther west, Iowa may not be well-known as a hot spot for Irish immigrants. But they began moving to Dubuque, IA, in 1833, to work in the town’s mines. Within a few years of the first settlements, the Irish tide began to sweep across Iowa. Larger metropolises near Dubuque—Cedar Rapids (No. 5) and Davenport (No. 8)—have deep Irish roots today. Davenport not only has a grand parade on March 17, it also keeps the party going the next day with a postparade bash.

Mining also brought the Irish to Colorado in the late 1800s. Most of them lived and worked in small towns on the Rocky Mountains, and they gradually spread out to the Denver metro area in the 1900s. Today, most of them live in Highlands Ranch and Centennial (No. 7), just outside of Denver.

The Kansas City area received its first big wave of Irish immigrants in the mid-1800s, when they responded to an advertisement seeking laborers to help build the city’s infrastructure and housing. In that sense, they were some of the first non-natives to settle there. Today, 14.4% of Irish-Americans live in Overland Park, KS, just outside Kansas City.

“Most Irish immigrants were bottled up in the [cramped city] tenements and had very few opportunities in the East, so they came” out to the Midwest, says Pat O’Neill, author of “From the Bottom Up: The Story of the Irish in Kansas City.”

“But they were promised a welcoming community, a place to stay, and a job.”

The page will reload automatically.
Go to the homepage

In order to log in to your account, you need to confirm your email address. Please check your inbox!
Go to the homepage